Yes, soccer. Or more specifically, MLS, and in particular, the San Jose Earthquakes.

Growing up, I was always in a soccer-first family in terms of physical activity, but of course baseball-first and football-as-a-close-second for spectator sports. Back in them thar days, the only regular soccer on TV was on the local PBS station on weekends, with Soccer Made in Germany (skip to 2:22 for the appropriate bits).

I always did like its colorful, 1970s Sesame Street-style countdown of the number of players on a side.

Admittedly, this also was where I learned that the world-famous team is not pronounced "Bay-yern Munchin'', as well as getting learning to pronounce Karlsruhe (carls-roo-uh) pretty close to correctly.  Knowing these facts ended up helping me in a very dramatic spot once, much later in life, but that story will have to wait for a future post.

However, today, this is the MLS that has teams that commonly exceed so-called "big four" pro sports individual game and annual attendance averages, and frankly, is on more meaningful sports broadcast channels than the NBA or the NHL.

[soapbox alert]
The lockout-crippled NHL can barely be mentioned in the same group anymore. Really, it's more like the "giant two" (NFL and MLB, only because each baseball team has 162 regular games in a year vs 16), and then pretty much it's anyone else hitting each other with whatever yardstick suits them best.

MLS has better attendance! *whack*
NBA Finals are still on a major network! *thwack*
NHL is still #1 in Canada! *whackamackthwakbackbrackadack*
(sound of everyone else hitting the NHL)
[/soapbox alert]

Anyhow, I saw a few Quakes games here and there in the early 2000s, and then the team was basically hijacked to Houston where they promptly won two MLS Cup championships in a row with our guys. Since the expansion's return to San Jose, I have been a season ticket holder. It's fun, affordable, and soccer is a great spectator sport.

At least until the league has it out for your team.

Here's the lineup vs. today's game vs. the Chicago Fire 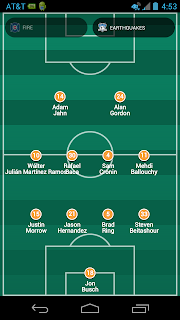 
Nothing against the guys filling out the Quakes today, but Salinas' suspension is pretty dubious. It's ridiculous for the MLS disciplinary committee (no, they don't deserve capital letters) to cherry-pick as much as they do for suspensions, in particular for plays that did not evoke a yellow card at the time of the incident.

It even undermines the credibility of the league's referees (as if that were even thought possible), and only supports critical comments about the officiating, about which the DC United coach was fined this week as well.

It is my opinion that these mid-week after-action review disciplinary actions are as politically motivated as they are supposedly objectively concerned with rule enforcement. When there's a player like Salinas, a class act by any standard, who receives a suspension in a tussle with a known on-the-field hoodlum rapist like Robby Keane, it raises eyebrows.

Of course, I mean "hoodlum rapist" in the best possible context, as Keane is a world-grade talent, pairing a deft, finesse touch on the ball to go with his elbow-to-your-philtrum manner of play.

See the altercation that earned the suspension for yourself, and see what you think:

It seems that the Earthquakes are often fighting the league office as often as their own on-the-field mistakes, dating back to the end of last season. The Quakes took the lead versus the eventual champion Galaxy in the first game of the initial home-and-home round of playoffs. The second game in San Jose was a disaster, and one I'm sure the head office wanted to avoid at all costs.

To paraphrase Wikipedia, for the first time in league history, the championship was not held at a previously selected neutral site (like an NFL Super Bowl). Instead, the match was held in the home stadium of the finalist with the best regular season record,  naturally, MLS League Office Comfy Chair (aka Home Depot Center) in Los Angeles. If the Quakes made it that far, the increasingly-prestigious MLS Cup championship game would have been held at 10,000 capacity Glorified Sardine Can Buck Shaw Stadium at Santa Clara University. That would not show well on TV.


Although the Quakes' own mistakes, and Galaxy's superior play that night automatically nullifies even the die-hardiest(?) conspiracy theories, it was not hard to imagine a bunch of old white dudes clinking champagne glasses and laughing in nondescript accents over the result.  I guess when the Quakes get their new stadium running next year, we shall see if the league politics will remain the same.

Posted by Todd Uncommon at 6:19 PM

Fourth on the record, different bra types with 35 patents, is Therics, a manufacturer of medical devices. These commercial firms perceive additive manufacturing’s potential to give them necessary advantages over competitors. Figure 19 reveals the highest and aspect views of a new new} high-speed 3D printer being produced by 3D Systems to help Google's Ara modular cellphone project. However, the machine isn't limited to the production of telephones, and it'll absolutely lead to numerous new customer/machine evolutions of latest enterprise. The development of 3D printing know-how has also made potential the production of three-dimensional geometries that would be unimaginable to make utilizing standard two-dimensional lithographic methods. Figure 17 reveals one such system, which consists of a dendritic channel disk with the purpose of delivering equal volumes of fluid to the perimeter surface with prolonged continuously recycled wetted outer surface.